Since opening in the early summer of 2019, Revolver Records on Franklin Blvd. in Gastonia, NC has been a big part of a resurgence of local options when it comes to shopping for vinyl. They were the first independent record store to open in Gaston County since the early 90s and have already proven to be a welcome addition.

When we stopped in, we found the relatively small shop overflowing with activity, and inventory. Seems they were in the middle of processing some very large collection buys so there were crates stacked all around. Being a true fan of crate digging, my trigger fingers were twitching from the moment we stepped towards the main aisle.

“It’s the ritual of it. It’s just like for a cigarette smoker. It’s taking a cigarette out, tapping it, lighting it, that first inhale. It’s the same thing with sliding the record out of the jacket, spearing the hole with the spindle, and then dropping the needle down. It’s the ritual of it.” – Co-Owner Ron Davis in an article with the Gaston Gazette

The store retail area is an L-shape with the always-popular “latest additions” awaiting you on the left as soon as you walk in. From there you can browse a well-organized set of rock/pop shelves leading onto most other expected genres. A very good selection awaits whether you’re looking for classic rock, 70s and 80s rock/pop as well as r&b, country and more along the main aisle.

Along the back wall we found a full area of used audio equipment for sale. A great selection of receivers and other components as well as a couple of turntables. Revolver had recently advertised a couple of very nice vintage turntables via their Facebook page and it appeared those were already gone which wasn’t a surprised as they were fantastic deals priced to move.

Back around the counter you’ll find other media along with jazz and blues vinyl. And make sure to look up as the walls are loaded with hot picks as well with new/sealed vinyl lining the area around and behind the counter area.

Pricing seemed to be very good overall. Everything was priced taking into account condition and pressing and there were plenty of great deals to be had. The new vinyl was mostly at or a little below expected retail price. While talking to Ron Davis about the store, he mentioned that with new vinyl, they limit it mostly to more in-demand titles as well as a focus on jazz and blues reissues since the prices for first pressings of those are really skyrocketing.

A few months back, Revolver began using an ultrasonic cleaning system for some of their inventory and they have started offering that cleaning as a service for those whose records need this extremely thorough cleaning method that can make a world of difference!

Bottom Line: If you’re in the area or passing through, be sure to stop in. Thousands of records in the bins with plenty of deals and a great selection with friendly/knowledgeable staff on hand makes this one another winner in the Charlotte metro region. 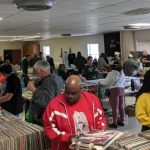